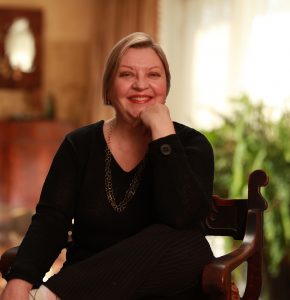 The James Thinkstitute was founded in response to the difficulty that people in business have  speaking to each other, the damage that results, and how simple it is to avoid.

A full career in television was the catalyst. Starting in independent production, sleeves rolled up, long, long days working with smart, talented people and fortunate that it included the television series Lorne Greene’s New Wilderness which won three Emmy Awards.

Then a period of business affairs, writing co-production contracts for CBC, start-up for the Canadian Retransmission Collective and its Acting Executive Director, and Executive Producer at YTV. To combine the knowledge and skills acquired, Eleanor went to Alliance Atlantis as a Production Executive for ten years. There she worked on three networks, including the launch of HGTV and Food Network Canada.

Eleanor has provided mentoring skills through Women in Film and Television, The Canadian Film Centre, and on several boards including The Cultural Human Resources Council where she chaired a steering committee on the television industry.

After a great run in television, change led to study with The Coaches Training Institute and coaching certification (CPCC), and membership with the International Coaches Federation. Eleanor is an active member of NCCA (National Communication Coaching Association of Canada) and is a Designated Communication Coach/Trainer with them.

The James Thinkstitute offers Say Anything to Anyone. It solves communication problems that affect us all in the workplace with fresh thinking on the subject.  “With many years of critiquing creative work and managing people, I know this is a learnable skill that removes barriers in the workplace. It makes you and your organization function smoothly in practical ways and that has a powerful impact on your business outcomes.”

Our services are customized for goal-oriented people, providing the tools to increase success in their professional and personal lives. Anywhere people talk to each other.